Breaking news in the Jiu Jitsu community today.  Keenan Cornelius, regarded by many as the greatest American Jiu-Jitsu revelation, is leaving TLI (Team Lloyd Irvin).  First on the scene to break this story was BestofBJJ.com posting a confirmation from Lloyd Irvin himself:

An anonymous source confirms that Keenan Cornelius is moving to his new team ATOS.  This is a huge development in the story.  Keenan Cornelius’ move to ATOS BJJ is not the first TLI member to leave TLI and join the ATOS BJJ team.  Mike Fowler made the same decision some time ago.

This must have been a very hard decision for Keenan Cornelius to leave TLI for ATOS.  This is still a very sad situation for a lot of people, but hopefully people can start the healing process and move on from this terrible situation.

This post will be updated as we get more information he will be training in San Diego with Andre Galvao.  This is a very interesting decision when considering that the Miyao brothers have recently moved to Costa Mesa for the time being to train with the Mendes brothers.

I definitely did not see this coming.  I thought Keenan Cornelius would be torn, but would ultimately stay with Team Lloyd Irvin and wait for all of the negativity to subside.  I will not speculate as to the reasons that ultimately influenced his decision, but I can definitely sympathize that it must have been a very stressful span of weeks.

Keenan is set to compete in Boston, but there is no word if he will still be competing under the TLI name, or if he will be competing under the ATOS name.  Regardless, this is a pretty interesting development of events that will definitely have an effect on the bjj competition scene.  Keenan Cornelius new team will expect to get a huge boost to their competitive roster.

A mutual friend from GRACIEMAG has confirmed that ATOS will be hosting Keenan Cornelius for their Pan Ams training camp.  This situation is delicate for several reasons.  The ATOS “leader” is respecting Keenan’s wishes to keep things under wraps for the time being until everything is resolved.  Keenan Cornelius will not be announcing his new team officially soon, but he has indicated that his new team will be ATOS.

It now appears that his previous silence is mostly due to some negative interactions in Maryland according to his father’s most recent Facebook status update:

An ATOS San Diego team member says Keenan Cornelius going to San Diego is the topic of conversation at the moment.

Yet another ATOS team member mentions Keenan Cornelius to join their team.

Keenan finally makes an official statement but fails to communicate who is new team will be: 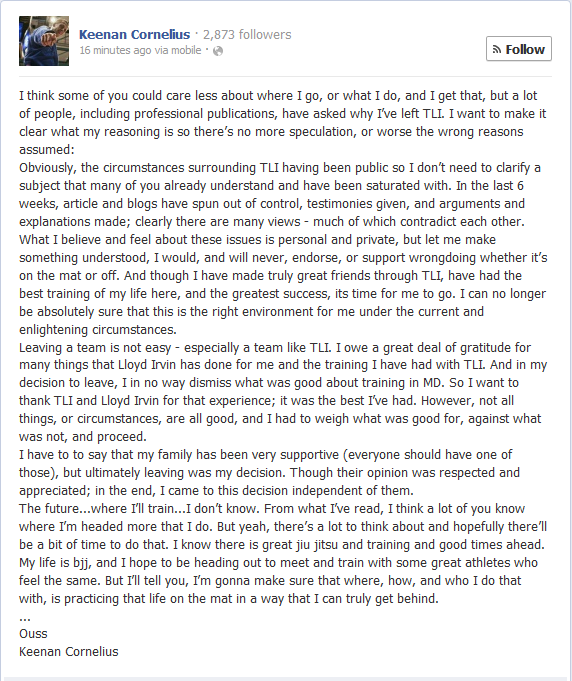 Although Keenan Cornelius has issued an official statement on his new team, as well as indicate on his own page:

Keenan Cornelius has FINALLY admitted that he left TLI for his new team ATOS BJJ.  Keenan Cornelius told Graciemag, the following, “…I do still need to register for competitions so I am asking professor Galvao if I can do that for the Boston Open and Pan.“

There you have it, I told you guys.  Keenan Cornelius new team is ATOS BJJ.